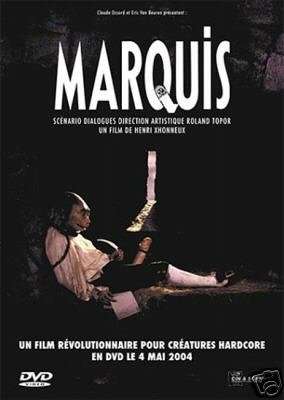 
Plot: A dog, the Marquis, has been imprisoned in The Bastille for his notoriously pornographic writings. He has conversations with Colin, his penis, who dislikes the Marquis’ writings. The rooster governor Gaetan de Preaubois discovers that the cow Justine is pregnant with the king’s child. To save the king embarrassment, de Preaubois and the Dom Pimpero conspire to have Justine placed in the Marquis’s cell where they can then claim the notoriously depraved libertine forced himself upon her. Instead, Justine is moved by the Marquis’s prose and the two fall for one another. Revolutionaries want to free the Marquis’s neighbour, the police chief Lupino who imprisoned the Marquis, and the Marquis agrees to give into the rat guard Ambert’s desire to be buggared for the good of the revolution. However, the Marquis finds difficulty persuading Colin to perform the task. At the same time, Dom Pimpero has discovered that he can make money by selling the Marquis’s pornographic writings without his knowledge, but has difficulty getting his hands on new material. Marquis comes from the fertile mind of the late Belgian director, writer, novelist and theatrical director Roland Topor. Topor also co-wrote and designed the great French animated sf film Fantastic Planet (1973) and wrote the novel that became the basis of Roman Polanski’s marvellously paranoid The Tenant (1976). Topor can also be seen playing Renfield in Werner Herzog’s Nosferatu the Vampyre (1979). Marquis could be described as a crossbreed between Quills (2000) and Meet the Feebles (1990). It is a re-enactment – albeit a loose one – of the life of the Marquis de Sade and the French Revolution – all conducted by puppets, puppets that are decidedly less than Disney or Henson-like. The fact that one of the central characters in the film is the Marquis’s talking penis should give one an idea of where the film is centred.
Marquis makes for fascinating comparison to Quills. Both cover essentially the same territory – the Marquis de Sade’s imprisonment. (Although, where Quills is set around de Sade’s later imprisonment in the Charenton asylum, Marquis concerns itself with his earlier incarceration in The Bastille. It is historically inaccurate in that de Sade had been moved ten days prior to the Bastille’s storming, although there is the possibly apocrpyhal claim that de Sade crying out the window from his cell, initially upset at being refused coffee by a guard, is what alerted and incited the crowds). Both works get inside de Sade’s urge to write no matter what, using sheets and his own blood, although Marquis makes far less melodramatic fuss about the frustrated creative urge than Quills does. Both are also sympathetic portraits of de Sade – in fact, Marquis goes even further than Quills in seeing de Sade as essentially a peaceable man more interested in the letters than depravity. The film takes a Romantic position – in fact, a Manichean one – of a man of intellect and letters warring with his sexual drive (and even has an end when his penis takes off to find a life of its own). In truth though, the Marquis de Sade knew no such restraint, felt no such war between mind and flesh. His work could not be regarded as something pure and aside from his baser urges – his urges plainly overran his work, it was construed as pornography simple and unadulterated.
Marquis has a literate script in its satiric take on the Revolution. Where it succeeds the most is in the outrageous joy of its obscene puppets. (Although these are not puppets so much as they are actors wearing animal heads, not unakin to a pantomime version of The Wind in the Willows [1908]). The faces are surprisingly fluid and expressive. There are some outrageously entertaining scenes like where the Marquis fucks a hole in a talking wall with his penis; or where he buggars a guard with a lobster; or of the guard masturbating milk from the cow heroine’s udders. There are animated visions of a spider becoming an octet of spread female thighs, or a coffin going into the ground becoming an outrageous image of it fucking the Earth. Scabrous, brilliant, a classic. - moria.co.nz/


In “Marquis,” a Belgian-French film featuring actors wearing masks that suggest barnyard animals, a spaniel-faced Marquis de Sade spends much of his time discussing philosophy, morality and strategy with a baguette-size likeness of a penis, which has a mind of its own. This is no idle conceit. In the film’s closing credits, the performer who supplies the voice of the penis — the character is named Colin — is given second billing.
Although the bawdy, flippant “Marquis,” which opens today at Film Forum, is clearly not for everyone, it turns out to be considerably more deft than might have been expected. As directed by Henri Xhonneux, with art direction by Roland Topor, the caricaturist, “Marquis” has a consistently acerbic style and a definite viewpoint, one steeped in late 18th-century French political and literary history. (Much of the film takes place in the Bastille, where the Marquis has been imprisoned for defiling a crucifix with the perverse gusto for which he remains famous.)
The film is sufficiently lighthearted to make Colin a literary critic: he supervises the Marquis’s writings and complains repeatedly about the overuse of verbs. In the same spirit, it names a couple of its female characters, a horse wielding a whip and a timid cow, after the de Sade heroines Juliette and Justine. It is also filled with reminders, sometimes more off-putting than clever, of why de Sade’s sexual proclivities were extreme enough to warrant their own nomenclature.
Among the film’s other characters, aside from the urbane, canine Marquis, are the rat who is his jailer, a camel-faced priest and a prison governor, a rooster whose facial features represent the film’s brand of choppy, inconsistent caricature at its most gleefully rude. Colin himself is memorable not merely for having the temerity to play such a primary role, but also for his sympathetic facial expressions and exceptionally encouraging manner. - Janet Maslin, NY Times, July 3, 1991